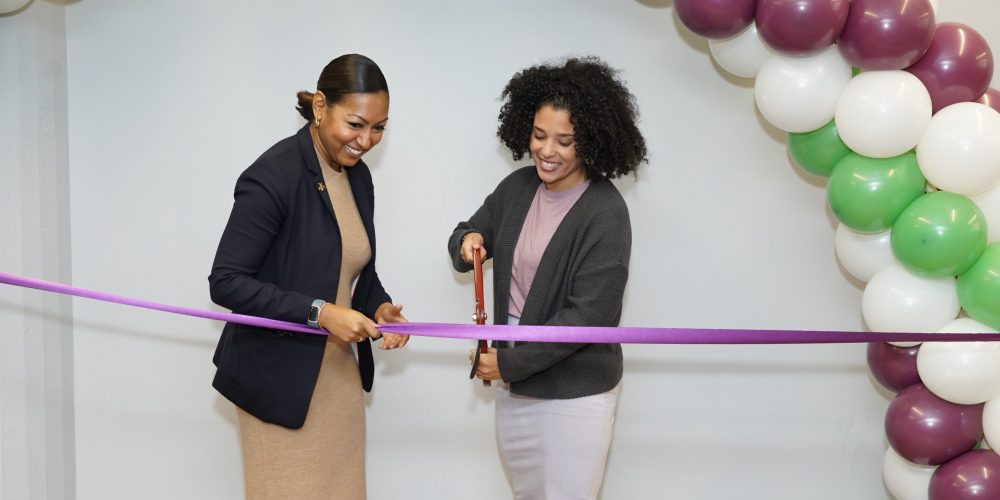 The elementary school, which currently serves ~150 students in Kindergarten through 2nd grade, was founded in 2020 with a kindergarten class that was housed on the campus of Brooklyn Prospect High School. SYES’ founding principal, Dana Mulwanda, a Brooklyn native, oversaw the school’s growth and transition to its eventual home in Sunset Park, where it will eventually serve up to the 5th grade.

In addition to members of the school community and school leaders, Tresha Ward, CEO of Prospect Schools, was in attendance to speak and celebrate.

“Building and growing diverse learning communities is what we’re about. We started with a 6th-grade class back in 2009 and now we’re a network of six schools serving about 2,200 students across Brooklyn,” Ward said. “We have a clear vision … to become the leading network of intentionally diverse schools where ALL students and educators can learn, work, and thrive. We are excited to see this school grow here in Sunset Park.”

The event, held in the school’s spacious lobby, drew several guests from the education sector.

“This is about you,” Kennedy said, addressing the second-graders and school leaders. “It’s incredible to be in a space filled with such love … and I know that’s not unique for today. It’s clear by talking to the teachers, community partners, and the social workers here that your wellness is really central to the school and that’s so important because each of you are the leaders right now.”

“I’m sure there are so many ways you build communities of care,” Kennedy told students. “You guide your younger and older siblings and families on what you’d like to see in the world. On behalf of [Public Advocate of New York] Jumaane Williams, on behalf of our team, we’re rooting for you because this school believes in you and we believe in this school.”

Next to speak was Principal Dana Mulwanda, who reflected on the sometimes challenging road to opening the school in Sunset Park, a multicultural neighborhood community known for both a booming Chinatown and a diverse Latino community.

“But, we’re here; we’re small; we’re a mighty school. And, after the pandemic, after opening during some trying times, I’m so honored to be here. It’s a testament to the work we’ve done together,” she said.

“I was raised in Brooklyn. I went to school in district 13 [where the school was founded in 2020] and I have a special connection to Sunset Park. My grandmother, the child of Puerto Rican migrants, actually worked in a factory on 33rd Street in what is now Industry City, so I’m very happy to be here.  I work at Prospect Schools because I believe in the mission and I believe in celebrating and honoring the diversity found in our beautiful borough, and making it something that our kids live with every day and understand.”

The large shiny ribbon, in purple to honor the elementary school’s color, was then cut by CEO Ward and Principal Mulwanda to a round of applause.

Parent Elaine Wang, mother of a second grader who started with the school back in 2020, as well as two other children who have gone to Prospect Schools, said she was overjoyed with the event.

“I chose Prospect Schools for all of my children for multiple reasons. It’s an I.B. school and … the level of teaching,” Wang said. “I’m a native Chinese speaker, and to be able to see the level of instruction for the [Mandarin language] program, I was very impressed.”

Sunset Yards Elementary School is located at 341 39th Street in a modern space in the historic waterfront neighborhood of Sunset Park, Brooklyn. Once a garment factory and warehouse, Sunset Yards has undergone floor-to-ceiling renovations and is outfitted with modern finishes and state-of-the-art infrastructure. The school has ~15 light-filled classrooms, a play space, a cafeteria, a library, and a multipurpose room that can be used for indoor play and large gatherings. Some of the space will continue to be developed as it grows by a grade each year to serve more students. The school currently has seats open in Kindergarten through second grade for the current school year and applications for the 22-23 school year open later this month. Stay tuned for more information on our website.