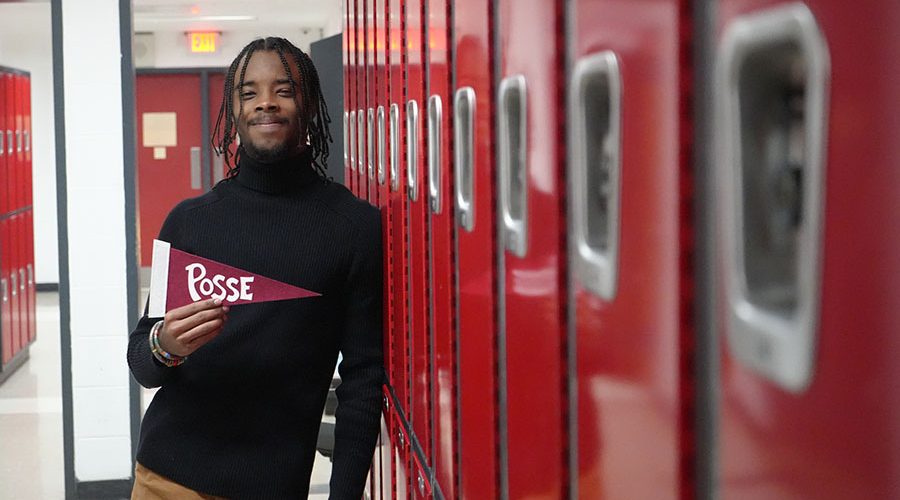 The Posse Foundation has awarded him a four-year full-tuition scholarship to attend Franklin and Marshall University and inclusion in a selective on-campus and career mentorship program.

The Posse Foundation identifies and trains students—a majority of who are first-generation in their families to go to college—who display exceptional leadership skills. In addition to the scholarship, recipients receive the benefits of attending college with a community known as their “posse.”

The program, started in 1989, was founded with the idea that “students who are coming in from different backgrounds and aren’t necessarily familiar with the college culture and environment could benefit from tackling the culture shock with a posse, or a group of their own who can support them,” the Foundation’s website says.

The Posse Foundation boasts benefactors such as Barack and Michelle Obama, Lin-Manuel Miranda, and numerous Posse alumni who hold prominent leadership positions across all sectors. In fact, Prospect Schools’ own CEO Tresha Ward is a Posse alumna. Ward was part of Vanderbilt University’s 11th cohort of Posse.

To be considered for Posse, students must be nominated and undergo an elaborate, three-step interview process. McEwan advanced from a pool of about 3500 nominees in New York State.

BPHS college counselor Nora Elnagar said McEwan was a natural nominee: “Even before we met the juniors [last school year], Liam was a familiar face because we’d see him volunteering at almost every school event, helping out teachers, dancing in the hallways, or just passing by to say hi. Liam is the student everyone knows and loves because of his warm and friendly nature. On top of that, he’s an exceptionally bright and academically strong student. As we got to know him better and hear about his passions and extracurriculars, his leadership skills were outstanding, and it was clear that he possessed all the qualities Posse was looking for in their students.”

Krystal Bostick, McEwan’s counselor, concurred: “Liam is very hardworking, reliable, and determined. As a first-generation student, he is motivated to go to college and travel the world. Liam embraces his journey and is inspired to make his mother proud. His passion for dancing keeps him on track and focused. Also, his way of giving to others in the world is the gift of dance, as he is able to spread compassion and joy to others who need it. Without a doubt, Liam will take the world by storm and leave an impressionable legacy anywhere he goes.”

McEwan will celebrate this achievement at a Posse New York Awards Ceremony in the spring. He’ll also have pre-collegiate training, where he will bond with the other scholars, forming a “posse” of students who can support each other when the first semester of college rolls around.

“I feel very lucky,” McEwan said. “When I went to the final one-on-one interview, I had done research on all the [Posse partner] colleges. Franklin and Marshall is a really nice school. I want to major in engineering, maybe mechanical. Computer science is a close runner-up.”

Although dance won’t be part of his academic course load, he isn’t worried about not having time for dance.

“I may have to put it on hold to focus on academics, but that doesn’t mean I won’t dance,” he said. “I’m probably going to create that experience on campus myself. I’ll find a way.”

Something McEwan is most grateful for about the scholarship is the fact that he can go away to college, something his mother, a native of Guyana who earned her college degree later in life, did not get to experience.

“She’s excited,” McEwan said. “She wants me to see the world and explore.”